Eloise and Caitlin are spending 2 weeks in Lira, Uganda, to monitor and evaluate the Cents for Seeds project. Here […] 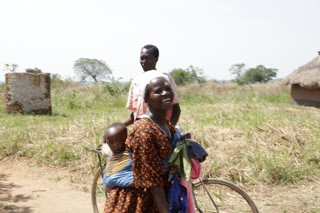 Eloise and Caitlin are spending 2 weeks in Lira, Uganda, to monitor and evaluate the Cents for Seeds project. Here is their first travel journal entry:

8/01/2012 – Elzy
It’s about 5am here in Uganda and I’m wide awake. I’m trying to tap softy so as to not  to disturb Caity or to rouse the mozzie’s lingering outside my mosquito net.
We had a long but safe flight here and we arrived in Enbebbe on Thursday to Julius’s welcoming beaming smile at the airport. We had one night in Kampala and we had a nice dinner at the hotel catching up with Julius and Grace and playing with 6 month old Jayden.
On Friday Julius and I went for an early training run in Kampala before starting the 7 hour drive North to Lira on a bumpy, dusty road. We had a full car, with Julius, Grace, Jayden, Florence and her 1 year old baby Grace and Caity and I. About 5 hours into the drive, all the warning lights lit up in Julius’s car, we were in the the middle of no where so we made it slowly (and nervously) to the next town where we found a mechanic so we waited by the roadside whilst he worked for 3 hours on the car with no result. We finally were able to pay a guy to take us all to Lira and we arrived exhausted but safe at about 1030pm. We are staying at the Kanberra hotel in Lira, and the staff are lovely and I feel safe here.
Yesterday, I got up early for a run with Julius and 19 year old Samuel (one of the original orphans who Julius found underneath the bus in 2003) and Samuels friend Quinto. Samuel is following in Julius’s footsteps with running.
I love running here, the sun rises and the roosters crow, we run along a dirt road the goes for 100’s of miles, passing farmers who stop and stare and sometimes call out as we run by. Julius translates as we run, they say things like “go go Muzungo”, (Swahilli for “White Person” or more literally “confused person walking around”) or they yell to the boys “don’t let the Muzungo beat you!”
After the run yesterday we had breakfast and headed to the village of Barr. This is one of the villages we do the cents for seeds program with. About 200 women met us singing and dancing and welcoming us into their village. We all sat in the church and they sung to us as a gift for running the program with them.
We then spent the following hour with them explaining how we were going to improve the program, what our vision is for it and encouraging them to make the most of it. It went better than we could have ever imagined, they were responsive and happy with what we had come up with to help break their cycle of poverty. We have a few new comers to the program and so we explained step  by step from how we fundraise by telling our friends about them in Australia, to them registering their names to receive their seeds and having a educational agriculture workshop (one of the big step in improving cents for seeds) to planting and farming and eventually harvesting and returning their loan and the rest they keep to eat, feed their family, sell at the market and store for the future.
We answered their questions and calmed their fears about if their was a serious drought and they did not get a harvest what if they couldn’t repay the loan. We told them about all the friends and supporters they have in Australia who love them and are standing beside them.
After the meeting we cracked open the some 200 bottles of soda and we watched and took photos as they sat and drank. A number of women came up to us at the front they would get down on one knee with hand reached up and say “opoyo” which means thankyou. There is not much that moves me more than this. To know that we are making a difference in this village causes me to thank god over and over again.
As we drove out of the village, a man who was very sick, shaking and groaning and sweating profusely  tried to get into the car, Julius thought he was a mad man and ordered him out, the man collapsed on the ground and Julius realized he was sick, he said he had no family to take him to get help and we were told by another man that there was a government run medical clinic a few miles up the road. On the way to the clinic in the car, the man was in a really bad way so Julius reached back and layed hands on him and we prayed for him, Julius asked if he wanted to receive Jesus and the man said “yes” and begun praying with Julius. We got him to the clinic and told the doctor and they layed him down and said they would take care of him.
It was a sobering drive back to Lira after a morning like that, TIA (this is Africa) 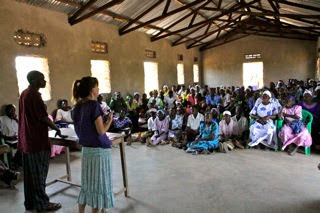 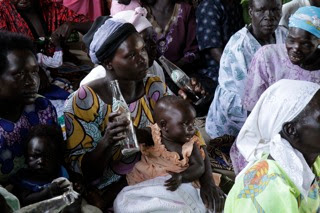 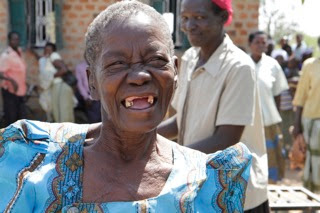 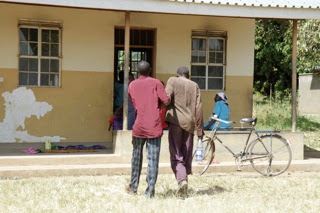