A Visit to Kristina

Anyess (left) and Betty (right) who are our longest serving midwives at KHC A visit to Kristina Health Centre is […]
A visit to Kristina Health Centre is always an exciting one. You never quite know what to expect or who you will find there. Being an extremely remote area, the Health Centre, which is classified as a Health Centre level 3, treats many and varied illnesses across a population of over 20,000 people.
When we arrived on Wednesday the midwives and nurses had just completed their free immunization service for babies. They were also being trained by the local health officer on the updated Ugandan immunisation schedule.
After the generosity of so many of our donors over Christmas, we were able to hire 3 more midwives in January, taking the number of midwives to Kristina to 5! Once they were finished their training I asked our longest serving midwife Anyess ,who has just had a baby herself, if she could take me to the maternity ward. She went ahead of me to ask the mother who had just delivered if it was ok to have a visitor through.

Rose welcomed me with open arms despite just delivering her 8th baby, and couldn’t stop praising the staff and the service that she received at KHC. Her birth was more slightly complicated… The midwives were monitoring her progress and decided that her labour wasn’t progressing as they would have liked. Our visiting midwife from Australia Christy, while she wasn’t present at the time, would have been very proud of our staff for making this call. Our 5 midwives are all quite young in their early twenties and for some of them this is their first role after their training. The are are all very eager to learn, extremely conscientious, and above all, they have a huge heart for women and for their babies. Christy imparted a world of knowledge and wisdom during her 4 months with them and wrote out detailed policies and procedures together with the midwives for them to follow in her absence.
In this case, the mother was referred to Lira hospital as her labour was goig on quite long and after monitoring the babies heart rate they could tell that the baby was going into distress. Anyess and Betty our two longest serving midwives had been taking turns monitoring Rose and her baby and had been swapping notes and helping each other make decisions. Once they realised that this was serious, they loaded her into the ambulance with Joyce, one of our newest midwives and off they went on the 72km drive to Lira.
Luckily the bumpy drive meant that her labour progressed quickly and suddenly she needed to push! Willy our ambulance driver pulled over and Joyce was able to help the mother deliver her 8th baby, a happy and healthy baby boy.
He gave the sweetest cuddles and gripped onto my finger. His fuzzy mop of hair so was adorable. What a miracle! I asked his mother Rose what she would have done without Kristina Health Centre, and she just shook her head and said,  “ I can’t even imagine.”

I was so proud in that moment. Proud of our midwives who all worked together as a team and supported each other under stress, and proud of our donors who banded together to donate $250 to cover a salary of a midwife for a month.

When I asked the mother what she would name her beautiful little boy she said that she had chosen a local name, but that she was yet to choose a first name. She asked for my suggestion, and I told her that my husbands name was Luke. She agreed, and chose to add Willy, the name of our ambulance driver. This is Luke Willy Ocen. 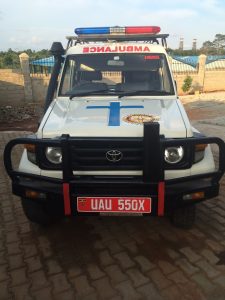 If you’d like to support our life changing work with mums and babies at our temporary maternity facility  while we await fundin to build a brand new ward, you can sponsor or contribute towards the cost of our midwives wages. $250 is all it takes for a midwife for one month. Maybe you or a group of friends could get together and cover the cost? The Mother Run kicks off this coming May ❤️ Ch

16 women die per day due to complications related

Scroll for Well Worth It’s 2020 impact and the g

Follow us
This error message is only visible to WordPress admins